The following post is very personal and rather long, so if you’re not interested, just skip. TQ.

Prologue: After I left Brunei in 1999, my Faith was the 1 thing that remained constant…throughout my journey as a student and into my working life, I started to become active in youth groups wherever I went. In Meradong, it was our mini daily gatherings before night classes, in Kuching it was the Young Catholic Undergraduates (YCU) and in Shah Alam, it was Catholic Student’s Society (CSS). I still keep in touch with CSS and was reunited with YCU when I worked in Kuching. I also joined Kuching’s Empowered Ministry (Youth Ministry of St Joseph’s Cathedral). But ever since I returned to Brunei, my Faith has been slacking…

The past week, however, has been different…but in a good way. A very good way.

On Monday, after work, I spontaneously decided to go to Church of Our Lady of Assumption (COLA) in Bandar Seri Begawan (BSB). I wanted to get the Mass schedules for the upcoming Holy Week, but it being the time when people get off work and the afternoon sessions in schools are over, it meant 1 thing – JAM! From my office to the church would take about 5 minutes or less, but with the jam, it took like 20+ minutes.  I was not really farmiliar with COLA as we go to Church of Our Lady of Immaculate Conception (COOL) as my family lives in Seria so I decided that I would not attend Mass if I could not find parking (as St George’s School is right there beside it, there are many many cars) but fortunately I did. A Higher Power was at work that day. Little did I suspect…

COLA‘s Parish Preist is currently under the care of Bishop Cornelius Sim, with the recently ordained Father Arin as Assistant Parish Priest. Both can be considered to be “originally” from COOL and my family’s history with the Bishop went back to long before he became Bishop. He was our Parish Priest in COOL back when I was just a little girl. Even after I left Brunei in 1999 to continue my studies and only really “came back” some 9 years later, I was touched he still remembered me. He actually hugged me when he saw me one Sunday after Mass at COOL when I came back to work here 6 months ago. My older brother actually teased me that the Bishop was “welcoming back the Prodigal Son”. 😉 Yeesh. In short, you could say that apart from being a Father in the Catholic sense, he’s personally a father-figure to me as well. And 6 months ago, he told me that if I were in BSB, meaning COLA, that I should look for him.

I have gone to COLA a few times since then but Bishop was nowhere to be found and not knowing anyone else, I usually immediately left after Mass. But on that day, I finally had the chance to say HI and what happened after that was just…my calling?

Bishop “kidnapped” me and “recruited” me to join the Youth/Young Adult Group of COLA and introduced me to all the active youths and others there that day. They had Bible Study that night and since I obviously came unprepared, Bishop lend me his Bible. By the end of the night (it was 10pm when I got home), I was “signed up” to join them on Tuesday and Wednesday night as well. Bishop, what have you gotten me into? 😀 LOL!

On Tuesday we had the Station of the Cross :  Scriptural Version which was the one used during World Youth Day (WYD) 2008 in Sydney. It was really moving…and I hope that I’ll be able to join the next WYD, which will be held in Madrid, Spain in 2011. On Wednesday we had the Adult Faith Formation : Following in God’s Footsteps (?) conducted by Father Arin, who, although my childhood did cross paths with his teen-hood, doesn’t know me. Yet. 😉

Epilogue: Yes, my Faith had been slacking for quite a while. With Easter coming, its about time I am “resurrected” from my “sleep”. Thanks Bishop, for “kidnapping” me that day…and thanks especially for always remembering me and my family… 🙂

As I’ve mentioned in my recent post, I went for this reunion thingy right?
Well, it kinda got me thinking…
Am I the kinda person that someone easily forgets, or am I the kind that someone will always remember?
Say you meet someone once and never see each other again, would they remember you when you bump into each other? Or say you got their number at that first meet, when you text them, will they reply:
Hey! It’s so nice to hear from you again! So how are you?
Or will it sound something like:
Err…who’s this again?
As I’ve admitted, I really was afraid that no one would remember me at the reunion…I mean, reunions are supposed to be where the topics of discussion are:
Hey! How are you now? Still single?
Hello! So I hear you’re engaged? Congrats!
Hi! How’s the wife and kids?
Congrats man! Heard you got promoted!
I’m so glad to see you again…How long has it been?!
and not…
Hey Angie! How are you?
My name is Betty.
or
Hey Dan! How are you?
Fine, thanks. And you are…?
or
Cindy and I used to hang out till late at night just talking…
I know. I was there.
Well, you get what I mean…
But hey! Turns out I was remembered afterall. 🙂 But most of them, I was never really close to, so them not knowing my name – not a big deal…
Important thing, they remembered me. Haha…
Though it does bug me sometimes when (especially sending text messages) you’re all “Hey,how are you? How’s life? Hope you’re feeling better now after that day. Really missed you. Take care ya…” and the reply is “Who is this?”
Freakin people! Save my number lah!!!
Anyways, that’s another story. 🙂
Now, some more pics from the reunion: 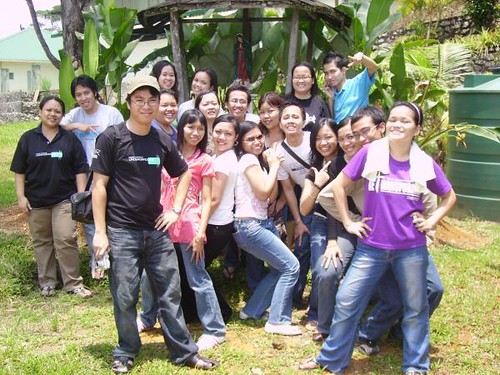 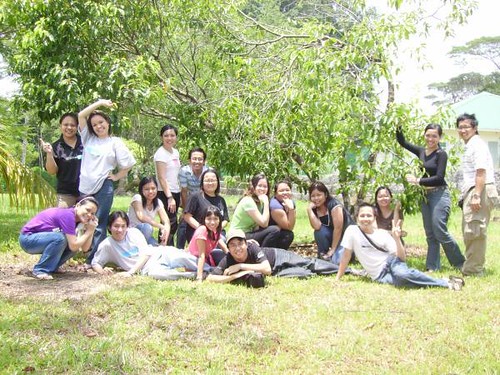 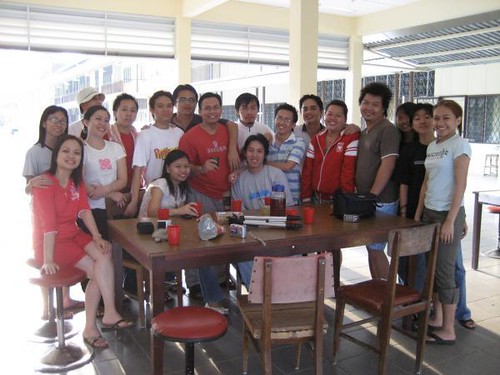 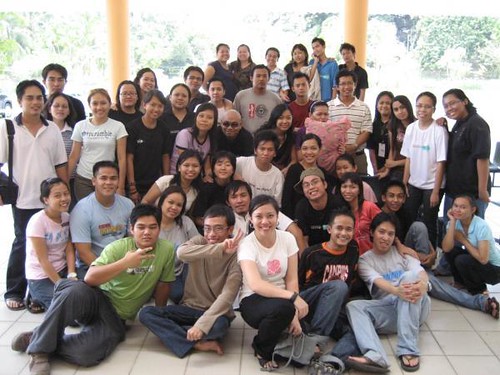 To having too much fun over the weekend…
Despite not being able to make it on Friday night as I was working on Saturday morning, I made it to the highly-anticipated YCU Family Day cum Reunion. (YCU – Young Catholic Undergraduates) I admit, I was more than a little anxious at joining. I was afraid that no one remembered me.
Imagine…3 years has passed (and for some even more than that!) since I last saw those from my batch…and the seniors, well…I think I last saw them about 4-6 years ago! Plus, I wasn’t exactly one of the “big guns” back in the day as I only joined in my final year so the chances of them remembering me were next to none.
But I went anyways and I did not regret it. In fact, I can’t ever imagine how much I would have hated myself and regretted it my whole life if I didn’t go!
The moment I arrived, Young approached me and greeted me at the car door (I almost didn’t recognize him, he looked different – in a very good way – then I last remembered) and then Fabian gave me a warm embrace that almost moved me to tears immediately. The last time I saw him was when our cars were side by side at the traffic light some 3 years ago…
And then other farmiliar faces turned up and regardless whether they immediately remembered me or needed me to jog their memories a bit, I didn’t mind much because those who have been close enough to me back in the day remembered me immediately. And some I was guilty of not remembering remembered me – that was just flattering. Plus, a few said I’ve lost weight since long2 ago…That’s just awesome! 🙂 And I also got to really get to know my seniors whom I never really got to know years ago…I got a second chance at making that first impression…
In short, it was just sweet sweet memories that weekend…and we also got to make new friends with those that NOW make up the “U” in YCU (whereas we are the ex-YCUs)…
I won’t type much cos what I felt over that brief weekend was just too overwhelming to put into words…so I’ll just post some of the pics I have. Not a lot cos I didn’t bring any camera. (I’m waiting for sources to get the rest of the pics.)
So here’s the pics that I do have: 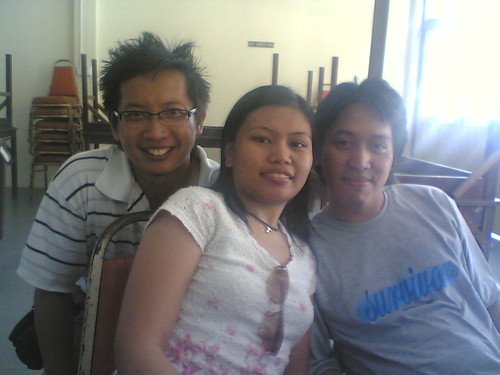 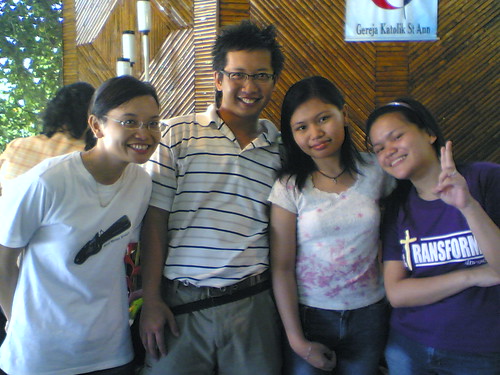 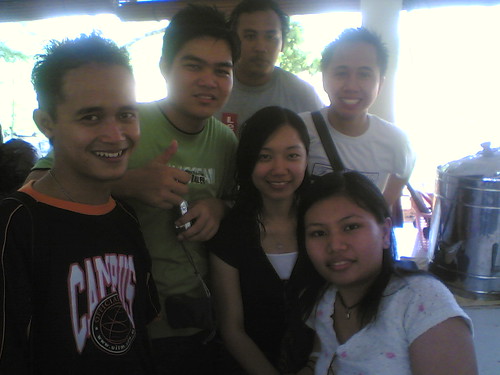 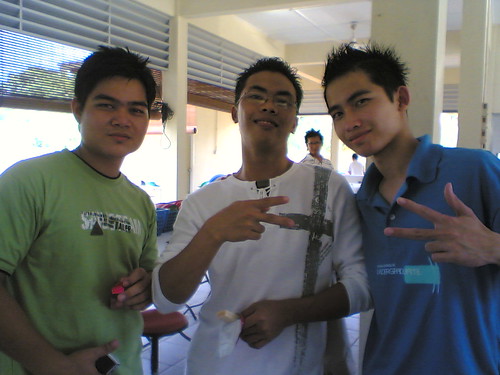 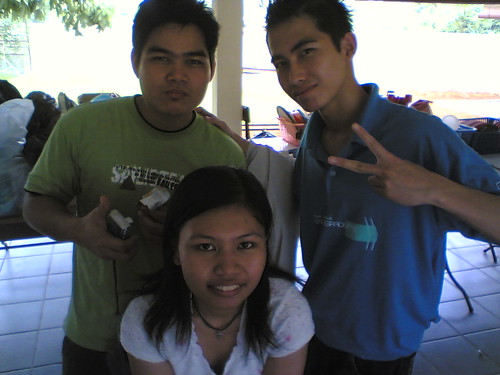 So yes, I plead guilty to having too much fun over the weekend.
And I am hereby sentenced to a stroke of cough and flu.
But you know what? It was totally worth it! 🙂
P/S: My hiatus has been postponed till end of this month.